Sweetgum Forge in the news!

I was recently featured in the Sunday edition of The Oxford Eagle, a local newspaper.  You can read the article here.   It’s a great piece on me and what I do, check it out!

Coding as a Craft

Coding should be taught to children alongside traditional “core” subjects, suggests this article. I don’t disagree that it would be good to teach kids the basic of coding. Vocational and crafts training has long been an integral part of successful educational systems throughout the world – for example, look up “sloyd“.

I do, however, take some umbrage at this quote:

“What’s fascinating about computer science is that it requires analytical skills, problem solving and creativity, while also being both foundational and vocational,” says Hadi Partovi, co-founder of Code.org, a nonprofit organization that promotes coding education. “I’m not sure there’s any other field that’s all those combined.”

I think any craft skill and most art skills have that, along with most skilled trades. Don’t believe me? Go look at an early 20th century machinist’s handbook or textbook! Check out the carpentry text from the days when carpenters started with rough cut wood and a folding rule (no offense to present day carpenters, there were just fewer shortcuts and pre-built components then).

I stumbled across this poem by DH Lawrence and, well, I like it. So I thought I’d share it here.

“What is he?”
dh lawrence

Oh quite! But he must work. He must have a job of some sort
-Why?
Because obviously he’s not one of the leisured classes.
-I don’t know. He has lots of leisure. And he makes quite beautiful chairs.

There you are then! He’s a cabinet maker.
-No, no
Anyhow a carpenter and a joiner.
-Not at all.

I’d say it was just a bird
-And I say he is just a man.
All right! You always did quibble.

I’m excited about the new website. It’s still a work a progress and you’ll see some changes as I refine and tweak it. There’s now an embedded shop listing, a calendar of upcoming shows, and a contact form where you can register for my mailing list. More to come!

One thing I really appreciate is seeing the process of creating when it comes to developing a new design/product  As a novice, seeing the first rough prototypes makes me feel better about my own work, and helps me in developing my own skills.  To that end, here’s a photo sequence showing the first 3 prototypes for a bottle opener.  The first attempt is at the top. 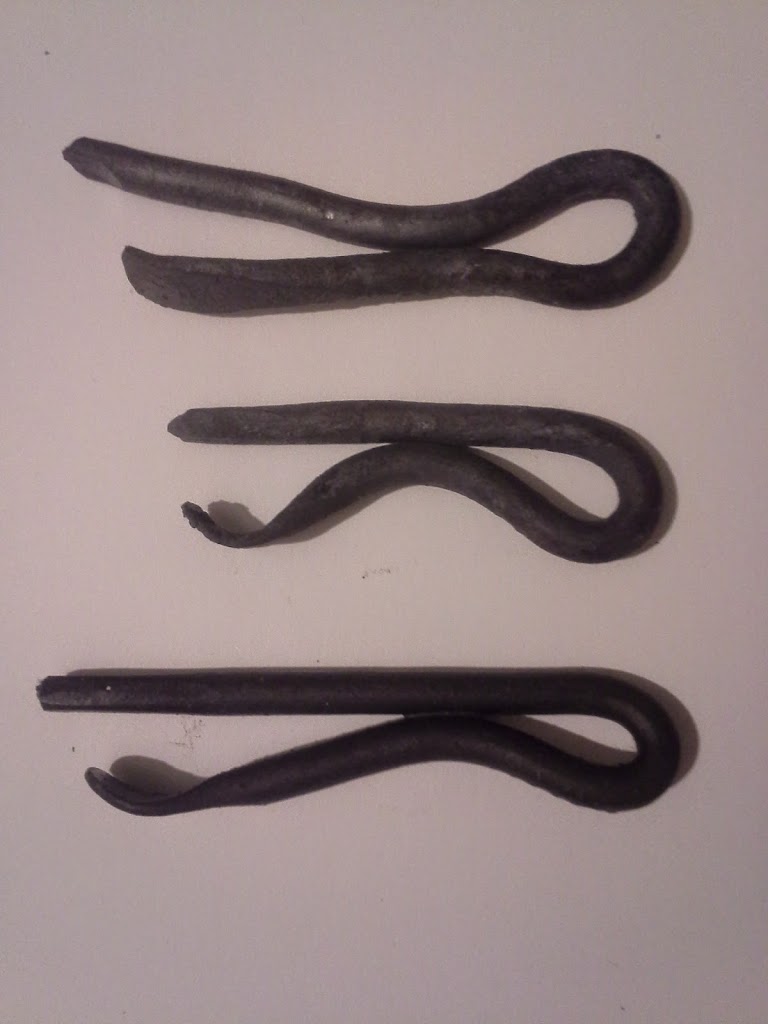 The first attempt didn’t go well, I ended up with a curve in the bit that needed to be straight, and the part that was straight needed to be curved.  In the second attempt I was able to refine the curves but realized I need to make the top bar a good bit longer, which led to the third piece.  The third piece turned out very well, and I finished it with a bit of copper wire: 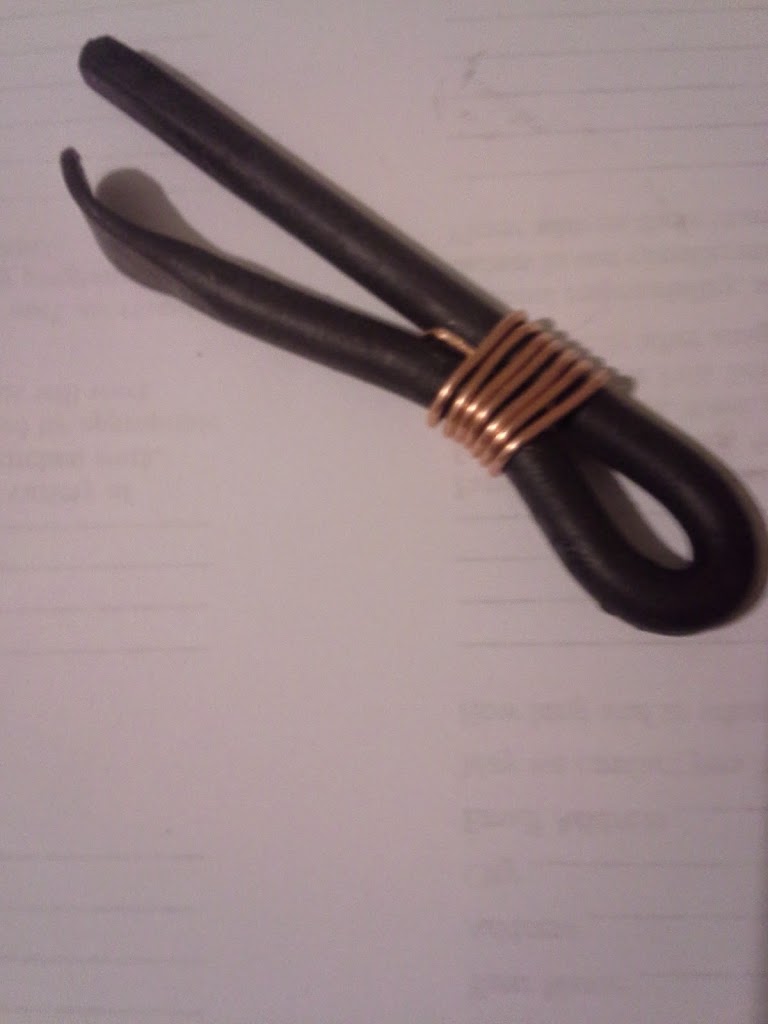 I need to extend the top bar further in the next one, I didn’t have a bottle to test on that day.  Note to self:  keep a 6 pack of bottled cokes around for testing!

At this point in my learning progression getting the order of operations down is the critical step in a project.  At the moment, with a project like this, I try to get a working model and then figure out the length of parent stock I need.  From there I can work out the steps to create more as efficiently as possible.  It may sound like mass production, but it’s really craft production of the sort that’s been done for centuries.

That’s a brief glimpse into my current design process for these small projects.  I’m sure my process will evolve over time as my skills improve.

I am catching up on adding completed pieces to the website.  I entered this piece in the 2014 Folks, Art, and Faulkner show at the Union County Heritage Museum in New Albany, MS. The theme of the show was Faulkner’s work. If you’re not aware, William Faulkner was born in New Albany, Mississippi just up the street from where the museum now stands. I created this piece for the show, titled “Burden”: 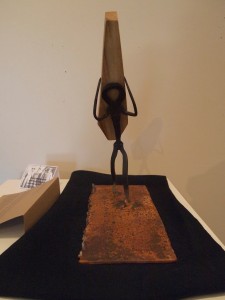 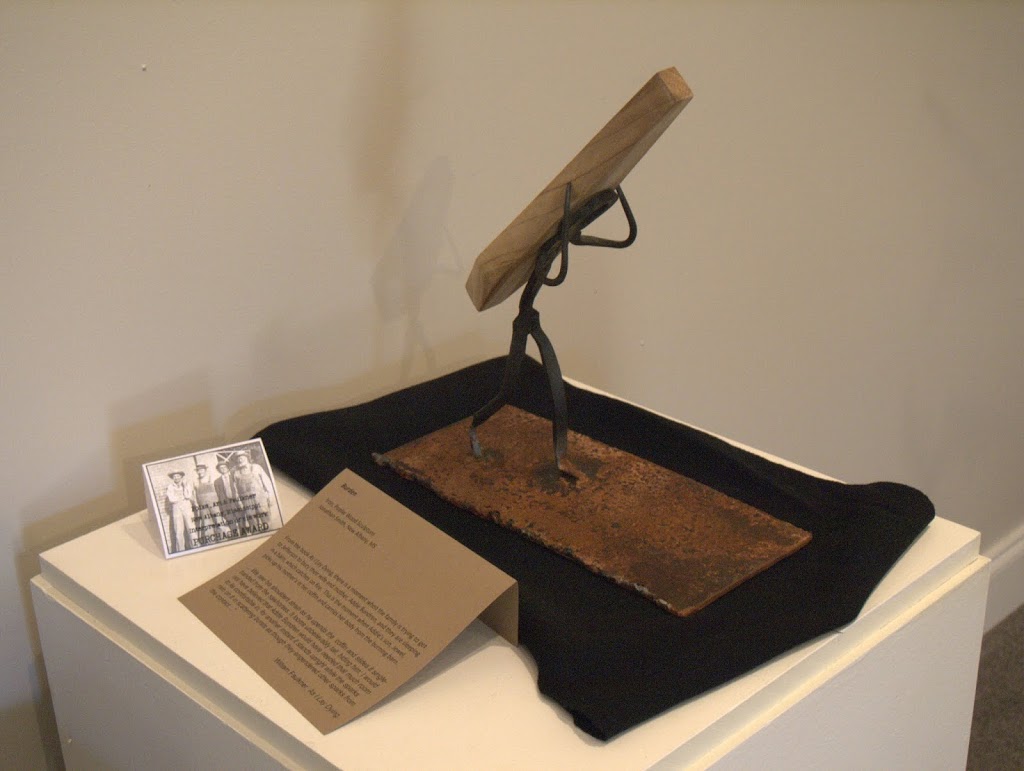 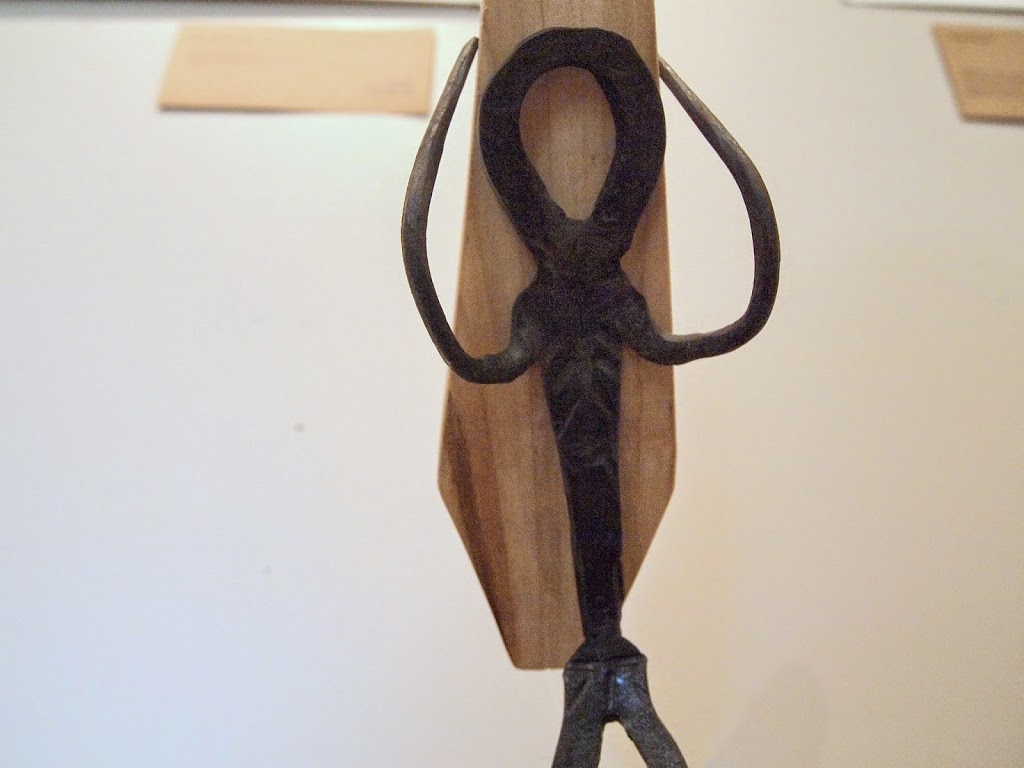 The piece was inspired by a scene from “As I Lay Dying”, where Jewel carries the coffin from a burning barn   I enjoyed creating this piece and I plan on continuing this series of abstract human figures   It was selected for the Purchase Prize and is now a part of the museum’s collection.  It seemed a fitting home for this little guy!

I’ve been working on creating some pendants and other jewelry.  You can see some examples in my Etsy store, in person at The Art of Dixie gallery, or take a look at the photo below.

A passel of pendants.

I’m enjoying working with jewelry and small pieces, but hopefully I’ll have some larger works completed as well!

Art vs. Craft aka “Craftfolk can be Artists Too”

Recently I was told, in a friendly manner, that I shouldn’t be down in the Craft area of a market. I should be up in the Artist area because my work was “good enough”. I appreciated the sentiment and their appraisal of my skill, but not the attitude. Blacksmithing, like other traditional crafts, seems to exist in a limbo somewhere between craft and art. It’s not “craft” in the modern sense, because you can’t buy the materials at the local BigBoxStore. It’s (often), not art, because most of it can’t be hung on a wall and it’s not a painting for-goodness-sakes. This perceived dichotomy between “art” and “craft” has been on my mind for a while. I’m not the first person to address this subject and I’m far from the most eloquent or qualified. Still, I wanted to explain what the terms mean to me, if for no other reason than to have something to point to the next time someone says, “Oh, but you’re an artist! You should be [over there/up there/down there/in there] with the artists!” I began my own thoughts about art with a simple statement: “Craft is useful, art is useless.” I formed this statement after reading a few things on Robin Wood’s and Jarrod Stone Dahl’s respective (excellent) blogs and watching a few videos where Barn the Spoon talks about why he makes spoons. It a statement that generally gets a reaction, and it’s supposed to. It is stated in the simplest terms, but they still require clarification. What I mean by that statement is that art objects, in a strictly functional sense, are useless. An example would be exquisitely carved spoons that are bent at angles which make them impossible to use as an eating or cooking utensil. Craft, in contrast, is the finely decorated and made spoon that is sturdy enough to be used for years mixing up cake batter and biscuit dough. Craft is that cherished mug, or spoon, or plate, or pen, or any other handmade object we find ourselves using day after day, that brings a simple pleasure to whatever we are doing. There was an article in a local paper, recently, about the renewal of pottery traditions in the area. In it there’s a quote that sums up what I’m trying to say quite well:

“I’m not making art, I’m making pottery,” Stewart said. “I find it infinitely more charming when someone calls me up seriously distressed because they broke their coffee mug and it’s the only one they want to use. It becomes something that they hold and put their lips on and their food in. It integrates with their life in a way that a painting can’t.”

So, my definition of art and craft has become a little more nuanced. I suspect it will continue to do so. One thing that my earlier definition doesn’t address is that neither is “better” than the other, at least in terms of cultural or social value. Artists provide a valuable service to the community. My reaction isn’t to art itself, it’s to the belief that anything hand made, and made reasonably well, is “art” and thus some sort of luxury or something that should be put on a pedastal. I want to see the hand-made become part of daily life again. Ultimately the reason I say I work at a craft, not an art, is because craft produces that which helps us live our everyday lives. I see it as a complement to the local food movement. The “Local Craft” movement, then, is where the plate you eat off of was made by the potter or woodturner down the road. Where the cheese on that plate came from the local dairy. Not out of necessity, because of “The End of the World As We Know It”, but out of choice. A choice made because we, as a society, have reached a point where we appreciate having quality items made by someone we know, or at least can meet face to face, over quantity. Not something that should be forced on people, either, simply something that will strike a chord in the souls of enough people to become a self-sustaining movement even here, in relatively rural Mississippi. I guess, what I’m trying to say, is I aspire to be a craftsman (who sometimes makes art), not an Artist who draws from a craft.

Where in the web am I?

After quite a bit of trial and error I’ve finally got a method down for making bottle openers I’m reasonably happy with.  I make a variety of styles, all hand-forged out of steel.  I’ve made a few out of re-purposed horseshoes, as I find a steady supply of horseshoes I’ll expand that offering. Here’s some of the recent bottle openers. 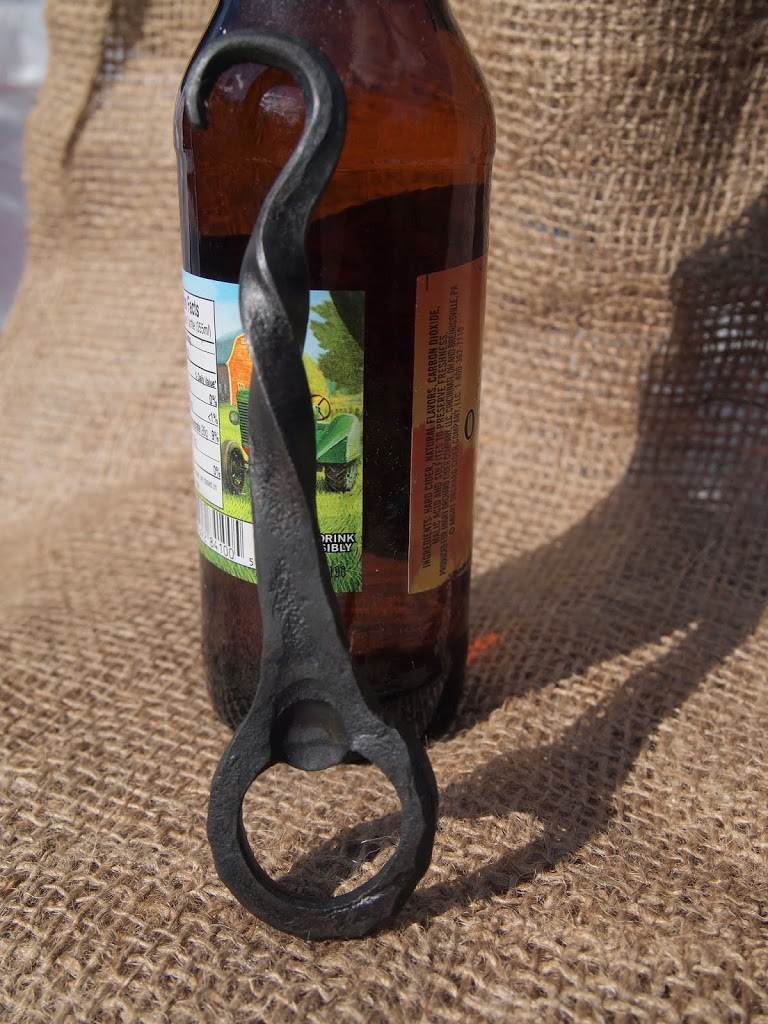 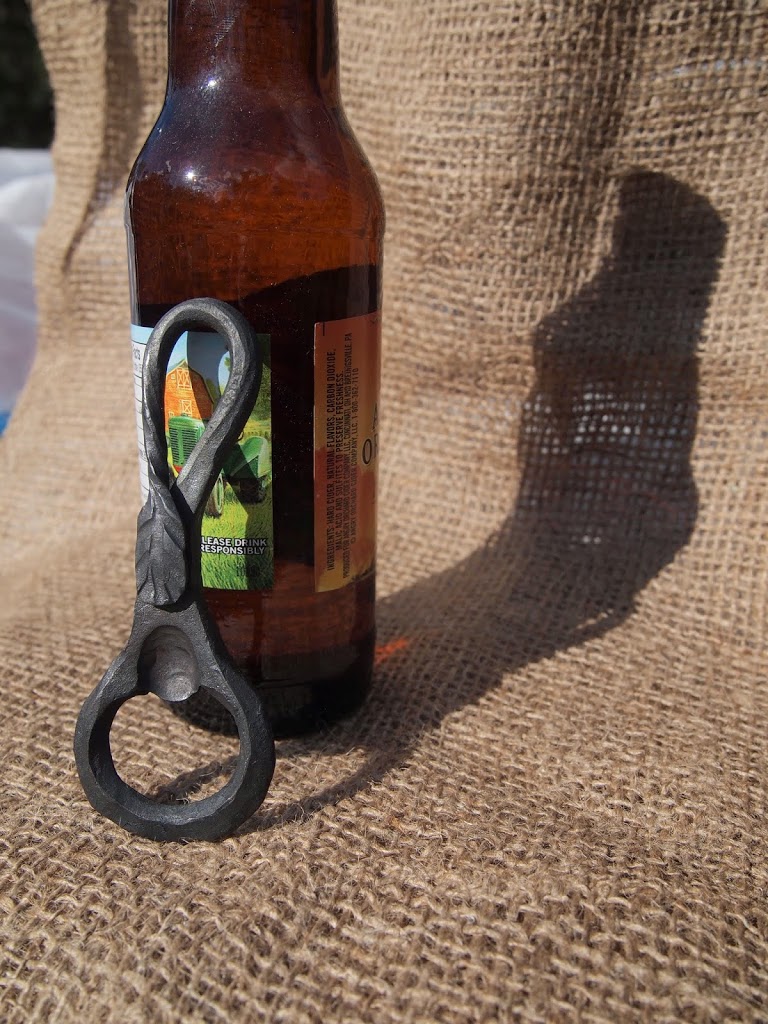